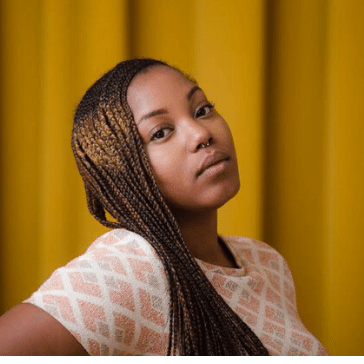 Camonghne Felix, M.A. is a poet, a writer, speaker, & political strategist. She received an M.A. in Arts Politics from NYU, an MFA from Bard College, & has received Fellowships from Cave Canem, Callaloo & Poets House. Her first full-length collection of poems, Build Yourself a Boat (Haymarket Books), was long-listed for the 2019 National Book Award in Poetry. She is a Brittingham & Pollak Prize finalist & a 2017 Fordham University Poets Out Loud semi-finalist. Felix's work has been published in BuzzFeed, Poetry Magazine, Apogee, The Offing, the Academy of American Poets website, & more. She's also been featured in New York Women's Foundation Magazine, Brooklyn Poets, Politico, Teen Vogue digital, Huffington Post & more. Camonghne was the Director of Surrogates & Strategic Communications at Elizabeth Warren for President. Formerly she was a Sr. Manager of Strategic Communications at Ms. Foundation For Women, the oldest feminist organization in the country. In 2015, Camonghne was appointed as a Speechwriter to Governor Andrew Cuomo, making her the first African-American female speechwriter, and the youngest speechwriter to serve a New York State governor.

We are proud to have
Camonghne Felix
as part of our organization. Please check back soon for a complete bio.