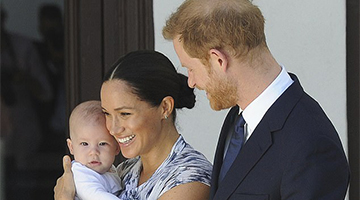 ‍Prince Harry and Meghan Markle said they would add a Joni Mitchell song to their ‘dinner playlist’ after a teenager recommended it to them during an online poetry class at the weekend.

The Duke, 36, and Duchess of Sussex, 39, were the guests of honor during a digital event organized by poetry group Get Lit in honor of Black History Month, during which Meghan ‘shared some of her favorite lines’ with the aspiring performers, while Harry expressed a keen ‘interest’ in poetry.

In a screenshot shared by Get Lit on Instagram, Prince Harry and Meghan are seen beaming with joy as they introduce themselves to the participants in the free class – which was attended by aspiring poets aged between 13 and 19 – many of whom are seen staring open-mouthed at the on-screen couple.

Meghan and Harry, who joined the call from the couple’s $14 million mansion in Santa Barbara, were also recommended a Joni Mitchell song by one of the young poets, with the group’s leader Mason Granger commenting on Instagram: ‘They talked about poetry, Meghan mentioned Joni Mitchell and one of them gave her a song recommendation, it was cool.’

Meanwhile Diane Luby Lane, Get Lit’s founder and executive director, told HuffPost: ‘They took music suggestions from the Poets and said it would be their dinner playlist.’

Diane also shared: ‘[Meghan and Harry] They both listened so deeply to every word of the 3 poems that they heard.’

Meanwhile she explained the couple also ‘discussed deep things like racism and the importance of listening to one another.’

Sharing the news of the couple’s appearance on Instagram, the Get Lit poet page commented: ‘We’ve saved the best for last! Guess who surprised our poetry class this weekend?!’

‘It was the best weekend EVER! Prince Harry and Meghan, The Duke and Duchess of Sussex, were magic and kind and interested in poetry!’ the caption continued.

‘The Duchess even shared some of her favorite poetry lines. We are so grateful for their visit in honor of Black History Month. It goes down as most epic experience in Get Lit history!’

Although the post did not share further details about which poems the Duchess chose to share, she has previously recited lines from A Note from the Beach by Matt Haig, as well as quoting pieces from Maya Angelou.

On its website, the organization explains that it is working to ‘increase literacy, empower the youth, and inspire communities’ through poetry, revealing that it now teaches it curriculum in more than 100 schools across California.

In the screenshot shared by Get Lit, Harry and Meghan are seen grinning from ear-to-ear while several of the students stare back at them in shock, with one even covering her mouth in surprise.

Both the Duke and Duchess dressed casually for the occasion, with Harry wearing a white polo shirt and a leather necklace, while Meghan is seen modeling a pale blue button down, with her long brunette hair left in loose waves around her shoulders.

The image also showed that the couple logged on to the Zoom call under the username ‘DoS’, which likely stands for either the Duke or Duchess of Sussex; Harry and Meghan have maintained the use of their royal titles since stepping down as senior members of the royal family in January last year, and often use them when they are taking part in public engagements.

Poetry teacher Mason Granger, who led Saturday’s class, thanked Meghan for encouraging his students to use their voices for the greater good, revealing that she discussed with them how significant the ‘ripple effect of a single voice’ can be.

‘Soooo Prince Harry and Meghan dropped into my poetry class on Saturday and kicked it with the Get Lit Players for a multitude of minutes,’ Mason wrote.

‘My favorite part of it all was Meghan echoing so many sentiments we’ve talked about in class, about this particular moment in time/history to be a young person and the ripple effect of a single voice.

‘The root of them deciding to come is because at some point in their lives, they were moved by a poem. And whoever wrote that poem at some point thought to themselves, “Does this even matter? Is anyone even listening?” And they shared it anyway.

‘Fast forward ripple ripple ripple and these kids get a surprise 45 minute chat with the Prince Harry and Meghan. It was pretty surreal. My kids shared poems, they asked questions, the kids answered and asked questions back, they responded authentically (they actually read and learned the kids bios I’d sent earlier).’

Another teacher, Sheila J, echoed those sentiments in her own post, in which she thanked Harry and Meghan for their ‘kindness and generosity’.

Several of the participants in the class also took to social media to share their surprise at seeing Meghan and Harry pop up on their screens, with one – Cielo – writing: ‘So…Prince Harry and Megan Markle came to our [Get Lit Poetry] practice on Saturday.

‘I- I’m at a loss for words on how cool and incredible this experience was. They were super kind, respectful and so genuine. I loved being able to hear them experience the impact of words and poetry with my fellow glps!!’

Another – Jovana – thanked the Duke and Duchess for giving her the chance to ‘share the art of poetry’ with them, while joking about how shocked she looked in the image taken during the class.

‘Live footage of me looking MORTIFIED trying to hold a conversation with Megan Markle,’ she wrote.

‘Thank you so much Get Lit for the opportunity and thank you to the [Duke] and Duchess of Sussex for allowing us to share the art of poetry with you.’

The posts were all shared at around the same time on Monday afternoon – with the official Get Lit account leading the publicity charge in what appears to have been a carefully-timed release that was no doubt coordinated with Harry and Meghan’s team of aides.

While Meghan was praised for helping to inspire the students in the poetry class, it is possible that they also helped to kickstart her own personal writing projects – after it was reported last week that she has some ‘very serious book deals on the table’.

According to Vanity Fair‘s Katie Nicholl, the Duchess is considering writing a book and has been approached with ‘lucrative offers from respectable publishing houses.’

Since stepping down as a senior member of the royal family alongside the Duke, the Duchess has secured lucrative deals including a contract with Spotify worth up to $40 million and a partnership with Netflix believed to be worth upwards of $100 million.

Having already mirrored much of the career paths of former President and First Lady Barack and Michelle Obama, Meghan now appears to be following in their footsteps once again with her own lucrative book deal.

A source explained: ‘Meghan has some very serious book deals on the table. They are all up for consideration.’

President Barack launched his memoir A Promised Land in November, while his wife Michelle released her biography Becoming in 2018.