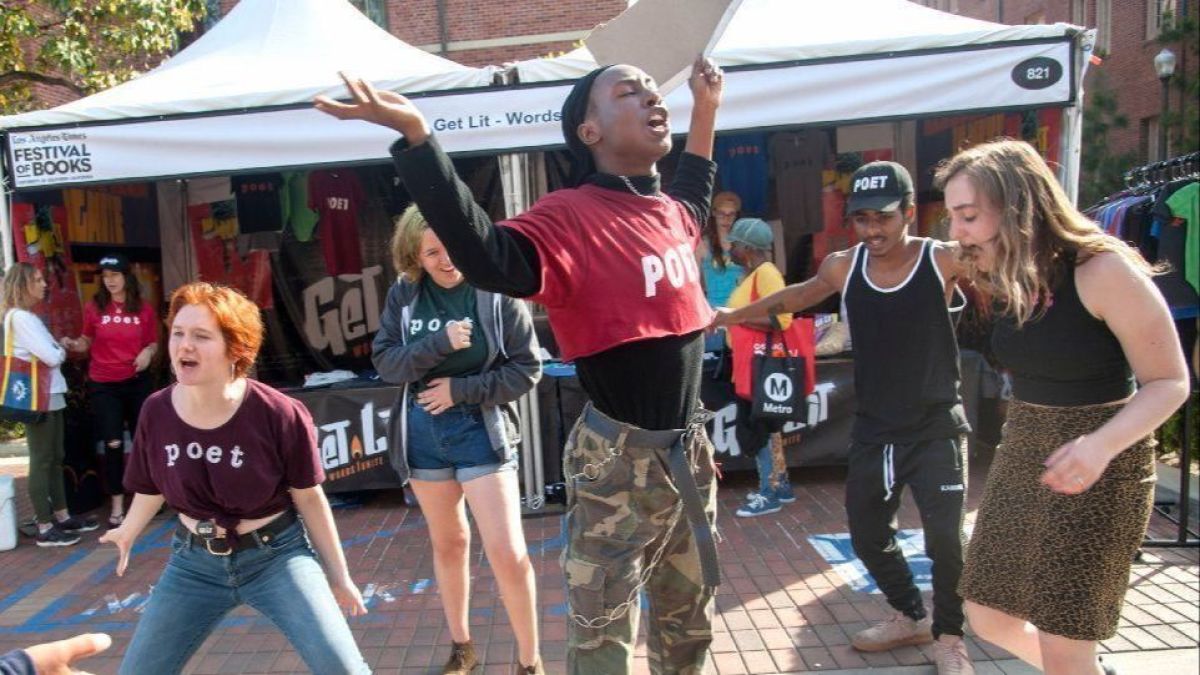 First the catcalls made her angry. Then they inspired her.

“You must understand that a body is just a body, a silhouette isn’t a definition of a woman,” Lewis writes in a poem called “Closed.”

This week, the Larchmont Charter School senior joins high-school students from throughout California at the Get Lit Classic Slam in Los Angeles. This is the 18-year-old poet’s fourth time performing on the Get Lit stage.

“The Classic Slam is a very exciting and nerve-wracking experience because I love being able to inspire others, but performing makes me really nervous,” Lewis said. “I used to have a huge problem of holding my problems inside, but that caused me to feel like I’m carrying a heavy weight on my chest.”

The best part about performing, she says, is the aftermath, “when others come up to me to express that they needed to hear my words. It made me want to keep writing and sharing my experiences in hopes that I can change someone’s life.”

More than 50 high schools are sending teams, each made up of six students, to the annual Classic Slam, which takes place Thursday and Friday at the Los Angeles Theatre Center, and Saturday at the Theatre at Ace Hotel.

This year’s Classic Slam, hosted by hip-hop artist George Watsky and Get Lit education coordinator Monique Mitchell, will bring together more than 300 students, many participating for the first time.

Get Lit – Words Ignite has hosted the poetry slam since 2012, when 18 schools competed at the Wiltern in Koreatown. The event was the brainchild of Diane Luby Lane, who taught a spoken-word poetry curriculum to high-school students in Long Beach, Compton and Watts.

When her students graduated, she thought they deserved a celebration — a chance to compete at a special venue.

“I didn’t want it to be in a high-school auditorium; I wanted it to feel gigantic,” Lane said. “If it failed, we would fail big, but if it worked, it would be great. And it worked.”

The first Classic Slam featured students from the Los Angeles area, and the event has grown significantly in recent years. This year’s slam includes schools from all over California, and from as far away as Boston.

Unlike most poetry slams, Get Lit invites students to recite classic poems, and then perform verses they’ve written in response. But the classic poems the students choose aren’t just textbook staples like Shakespeare sonnets or John Donne odes. Slam attendees are just as likely to hear the work of Rudy Francisco and Tupac Shakur as they are to hear poems by Emily Dickinson and Walt Whitman.

Many participants never had an interest in poetry until seeing performances by the Get Lit players. That was the case for Khamal Iwuanyanwu, now 20, who was the highest-scoring individual poet at the 2015 slam. This year, he will be in the audience.

“In seventh grade, I had a poetry class, and I failed it so hard,” he said. A few years later, an English teacher invited students to an assembly featuring Get Lit poets.

“It was one of the mind-blowing experiences I had ever had,” Iwuanyanwu said.

At the 2015 slam, he set a pastoral Southern California scene as he took the stage to read his poem “Sepia.”

“Autumn leaves fall from aging trees,” he said. “The sun rays leave the air in a golden haze. Hey there, hello. I never realized how beautiful the sky could be.”

In a matter of seconds, however, his voice broke and his delivery quickened as the Cleveland Charter High School student described the experience of being a young black man in America.

“Black boy, beware your skin,” he said, as the crowd gasped and cheered his poem, which has gone viral on YouTube. “It is not a trophy, but a target, a mark for the bullet to hit. Black boy, we are all human. Don’t worry about the color of your skin. But I have to, because I know what I am, a black boy.”

“I had always been interested in writing, but it wasn’t until discovering Get Lit and the Classic Slam that I had a community to share my passions with,” Cuda said. “It was the community aspect, as opposed to the competitive aspect, that really piqued my interest.”

Cuda’s Classic Slam team won in 2015 and 2016, the first to notch back-to-back victories. She said participating helped her find her way: “to write, to teach, to heal, to help.”

The slate of judges for this year’s event include poets Olivia Gatwood, Sam Sax and Rudy Francisco, as well as filmmaker Carlos López Estrada (“Blindspotting”) and actor and producer Pamela Adlon. (An upcoming episode of Adlon’s television show “Better Things” takes place at the Classic Slam; her daughter participated in the event a few years ago.)

Nia Lewis said being part of the annual slam has brought out confidence and power she didn’t know she had. “I thank Get Lit for teaching me that I have a voice that the world needs to hear.”